The African Union has several organs mandated to oversee matters legal matters on behalf of the Union, its Member States and African Citizens.

The main legal organs are:

The ACHPR was inaugurated in 1987 to oversee and interpret the African Charter on Human and Peoples’ Rights (also known as the Banjul Charter). The Charter is a human rights instrument designed to champion the promotion and protection of human rights and basic freedoms in Africa.

Under the Charter, the ACHPR is charged with three major functions, the:

The Charter provides for a ‘communication procedure’, under which states, organisations and individuals may take a complaint to the ACHPR alleging that a State Party to the Charter has violated one or more of the rights contained in the Charter. Following consideration of complaints, the Commission can make recommendations to the State Party concerned and to the AU Assembly.

The Commission may use its ‘good offices’ to secure a settlement at any stage of the proceedings. In emergency situations, where the life of a victim is in imminent danger, the Commission can invoke provisional measures under rule 111 of its Rules of Procedure requesting the state to delay any action pending its final decision on the matter.

The ACHPR is based in Banjul, Gambia. Communication decisions, State Party reports and activity reports are available on the Commission’s website, www.achpr.org.

The ACHPR consists of 11 members elected by the AU Assembly from experts nominated by State Parties to the Charter. The Assembly considers equitable geographical and gender representation in electing the Commission members. Terms are for 6 years, and members are eligible for re-election. The Commissioners serve in their personal capacities. In April 2005, the AU issued nomination guidelines excluding senior civil servants and diplomatic representatives. The ACHPR elects a chairperson and vice-chairperson as the Bureau. Their terms are for 2 years, renewable once. The Bureau coordinates the Commission’s activities and supervises and assesses the Secretariat’s work. The Bureau is also empowered to take decisions between sessions on matters of emergency. The Secretariat provides administrative, technical and logistical support to the Commission. Staff are appointed by the Chairperson of the AUC.

The ACHPR  holds 2 ordinary sessions a year, usually for 10 to 15 days each in March/April and October/November. Extraordinary sessions may also be held. The working sessions may be open or closed to the public. The Commission may invite states, national liberation movements, specialised institutions, National Human Rights Institutions (NHRIs), non-governmental organisations (NGOs) or individuals to take part in its sessions. As of May 2017, the Commission had granted affiliate status1 to 27 NHRIs and observer status to 504 NGOs.

The AfCHPR has jurisdiction over all cases and disputes submitted to it concerning the interpretation and application of:

The Court complements and reinforces the functions of the African Commission on Human and Peoples’ Rights. Contrary to the ACHPR, which can only make recommendatory decisions, the Court’s decisions are binding and can include orders of compensation or reparation.

Under the Protocol establishing the Court, the Commission, State Parties to the Protocol and African inter-governmental organisations are entitled to submit cases to the Court. Non-governmental organisations (NGOs) with observer status before the Commission and individuals from State Parties that have made a declaration accepting the jurisdiction of the Court can also institute cases directly in accordance with article 34(6). As of September 2017, 30 states had ratified the Protocol and 8 had made a declaration in accordance with article 34(6), with one since withdrawing (see https://au.int/en/treaties)

In January 2016, the AU Assembly, as part of a decision on streamlining AU working methods, decided to empower individuals to directly petition the Court on the implementation or otherwise of AU policy organ decisions, provided they come from a Member State that is a party to the Protocol establishing the Court and that has accepted the jurisdiction of the Court to receive such cases in conformity with article 34(6) of the Protocol (Assembly/AU/ Dec.597(XXVI)).

The AfCHPR is based in Dodoma, Tanzania

The Court consists of 11 judges elected by the AU Assembly from African jurists nominated by State Parties to the Protocol. The Assembly considers equitable geographical, legal tradition and gender representation. The judges serve in their personal capacities. They are elected by secret ballot for six-year terms, renewable once (with the exception of some of those elected at the first election). No two judges may be of the same nationality. The judges elect a president and vice-president who serve two-year terms, renewable once.

The President of the Court works on a full-time basis while the other 10 judges work part time. A registrar assists the President with managerial and administrative work.

The current President of the AfCHPR is Sylvain Oré, from Côte d’Ivoire (elected 2014) and the Vice-President is Ben Kioko from Kenya (elected 2016)

The AU and Senegal agreed in August 2012 to establish the Extraordinary African Chambers (EAC) within the Senegalese judicial system to “prosecute and try the person(s) most responsible for crimes and serious violations of international law, customary international law and international conventions ratified by Chad, committed on the territory of Chad during the period from 7 June 1982 to 1 December 1990” (EAC Statute, article 3). In line with article 37 of the Statute, the Chambers were dissolved automatically after a final appeal by lawyers for Hissène Habré, President of Chad 1982–90, was decided in April 2017. For more information about EAC, see www.chambresafricaines.org and www.forumchambresafricaines.org

The AUCIL was created in 2009 as an independent advisory organ in accordance with article 5(2) of the AU Constitutive Act. Article 5(2) provides for the Assembly to establish organs as it deems necessary.

The AUCIL’s Statute, states the Commission’s objectives, which include to:

The AUCIL consists of 11 members elected by the AU Executive Council and reflecting the principles of equitable geographical representation, the principal legal systems and gender representation. The members serve in their personal capacities, and no two members may be of the same nationality. They are elected by secret ballot, usually for 5-year terms that are renewable once.

The Commission elects a chairperson, vice-chairperson and a general rapporteur as the Bureau. Terms are for 2 years, renewable once. The Bureau coordinates the Commission’s activities and, between sessions, acts on behalf of the Commission under the Chairperson’s guidance.

The Commission’s composition and the election of members are governed by articles 3 and 10–14 of its AUCIL statute. Members perform their duties on a part-time basis.
In accordance with article 21 of the AUCIL Statute, the AUC provides the staff and infrastructure to the AUCIL Secretariat to enable it to carry out its duties effectively. The AUCIL Secretariat is headed by a secretary and located in the Office of the Legal Counsel of the AUC

The AUCIL meets twice a year in ordinary session at AU Headquarters and may meet elsewhere. It may meet in extraordinary session at the request of the Chairperson or two-thirds of the members. In addition to these sessions, the AUCIL holds an Annual Forum on International Law, usually for two days. The Forum is a platform for international law experts and enthusiasts to deliberate on relevant major topics, create awareness about AU and international law, and identify ways to accelerate regional integration. AUCIL also consults with inter-governmental, international and national organisations

AU Advisory Board on Corruption (AUABC)

The AUABC was established in May 2009 as part of the African Union Convention on Preventing and Combating Corruption, which entered into force in August 2006.
The AUABC is mandated to promote and encourage State Parties to adopt measures and actions to meet the Convention objectives and to follow up the application of those measures. As of September 2017, 49 countries had signed and 37 had ratified the Convention. The full list of signatories and ratifications is at https://au.int/en/treaties.

The Board’s main mandate is to promote and encourage the adoption of measures and actions by State Parties to the Convention to prevent, detect, punish and eradicate corruption and related offences in Africa; to follow up on the measures; and to regularly submit reports to the AU Executive Council on the progress made by each State Party in complying with the provisions of the Convention.

The Board’s mission, also includes to: collect and document information about the nature and scope of corruption and related offences in Africa; advise governments on how to deal with corruption and related offences; develop and promote the adoption of harmonised codes of conduct for public officials; and build partnerships with all the continental stakeholders to facilitate dialogue in the fight against corruption.

The AUABC is based in Arusha, Tanzania

The AUABC is composed of 11 members who serve in their personal capacities. Terms are for 2 years, and members can be re-elected once. Potential members are nominated by AU Member States. The AU Executive Council elects the members, taking gender and geographical representation into account. The Board elects its bureau from among the members, comprising a chairperson, vice- chairperson and rapporteur. Bureau members are appointed for 2 years. The Bureau’s role is to ensure the planning and coordination of Board activities necessary to execute its functions under article 22(5) of the Convention. The Board is supported by the Executive Secretariat, managed by the Executive Secretary. The Secretariat functions under the direction of the Bureau and the supervision of the Rapporteur.

The ACERWC draws its mandate from the African Charter on the Rights and Welfare of the Child (ACRWC). As of June 2017, only 7 AU Member States had not ratified the Charter (DRC, Morocco, Sahrawi Republic, São Tomé and Príncipe, Somalia, South Sudan and Tunisia. (See https://au.int/en/treaties).

The Charter provides for an 11-member committee of experts. The Committee is supported by a secretariat. The Committee’s functions  include to:

The 11 members of the ACERWC serve in their personal capacities. They are elected by the Assembly in a secret ballot from a list of people nominated by State Parties to the Charter. Candidates are required to be of high moral standing, integrity, impartiality and competence in matters of the rights and welfare of children. Terms are for 5 years. Bureau members are usually elected from within the Committee for two-year term

Find out more about the legal organs,  their evolution and membership by downloading the AU Handbook

END_OF_DOCUMENT_TOKEN_TO_BE_REPLACED 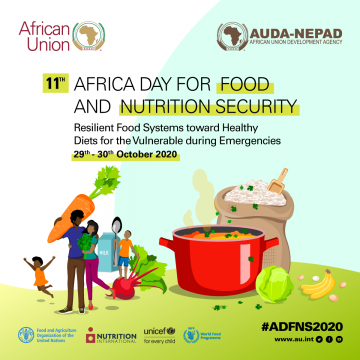 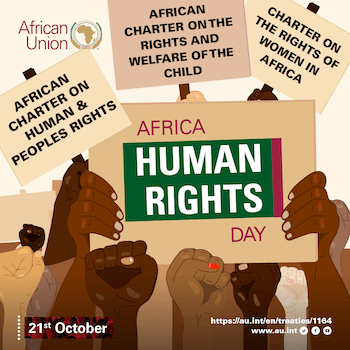